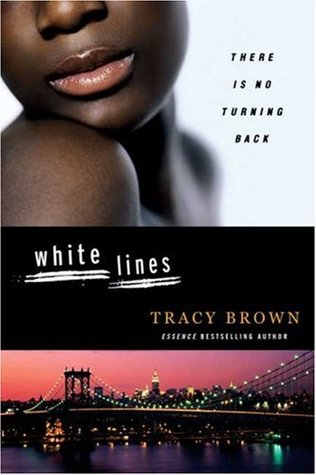 Why I Picked It Up:
It was an  accident. An honest-do-goodness accident. I was actually looking for a book by the same name by Jennifer Banash. However even after I realised my mistake, I continued reading simply because of the super high rating goodreads ( 4.49/5 which is astronomically high).

Blurb:
Jada left home at the age of sixteen, running from her own demons and the horrors of physical abuse inflicted by her mother’s boyfriend. She partied hard, and life seemed good when she was with Born, the neighborhood kingpin whose name was synonymous with money, power, and respect. But all his love couldn’t save her from a crack addiction. Jada goes from crack addict and prostitute to survivor and back again before she finds the strength to live for herself and come out on top. And her stormy romance with one of the fiercest hustlers on the streets makes White Lines one of the most unforgettable urban loves stories of the year.

My Thoughts So Far:
So far, the book seems unnecessarily long. The main message is ‘Just say no to drugs. They hurt everybody.’ but Tracy Brown spends an inordinate amount of time describing the poverty, violence and vulgarity of the seedy areas of Brooklyn and nearby places. I guess it’s important but neither the setting nor the characters captured my imagination or made me invest in them. The detailed description of the drug business was uncomfortable the first time but by the seventh or eight time, I was desensitised to it and it almost seemed repetitive. And trust me, desensitisation is never a good thing for books; especially when an author wants to show just how terrible it is.

Another thing that bugs me about this book is that all of the characters seem to lack something vital to every human being- a conscience. They never seem to regret the fact that they have murdered and left a path of destruction behind them or that their wealth has been derived from murders and violent acts. I don’t know if she based her characters on stereotypes or if the present-day stereotypes were formed based on the actions of black gangsters in the 1980’s and 1990’s, but to me these characters seem laughably cookie-cutter and unbelievable. Of course, you should keep in mind that I’ve never actually experienced or seen this much poverty and addiction so I can’t really say what a person like Jada or Born would think or act like.

The writing makes this book even more annoying to read. This is a textbook example of telling instead of showing (and we all know how that hurts a book’s enjoyability). Also, there is way too much cussing in this book. I’m not that sensitive about swearing in books but I maxed out my limit in this one. I have yet to come across a page in this book that does not feature a three letter, four letter or five letter curse word (or several). I can appreciate a well-placed curse word but when these words are repeated so many times, I lose faith in the vocabulary abilities of the author/characters.

Continue reading?: No. This is a definite and irrevocable no. While I thought the basis of the storyline was quite good, the execution of the idea was…lacking.