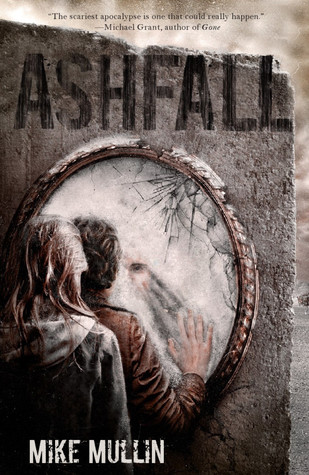 The cover didn’t exactly drum up much enthusiasm for me. For some reason, I was reminded of Narcissus after seeing the cover. A mirror? Seriously? I know that teenagers can be self-obsessed and writers writing in first person need to have people look in mirrors so that their readers can get an accurate description of the main character,  but in the wake of an apocalypse why would people spend time staring at their face in mirrors? That’s a good question and one they don’t answer anywhere in this book because nothing like this ever happens in the book. I guess the other things on the cover are accurate enough, though.  For example, Darla really does wear a grey sweat shirt and she does have blonde hair. But I’m still hung up on the fact that their is a huge mirror which is hugely inaccurate and taking up all the space on the front cover.

The Main Characters move around a lot and rarely meet the same person twice so there’s not a lot of characters that I can really talk about. However, I can vouch for this: Mike Mullin has gone for quality over quantity. There are two main characters in the book and the author’s done a great job with their characterization.

The characterization is… realistic (there’s no other way to describe it. I hate to break it to you, but kids who face hardship don’t automatically become Enid Blyton kids. The girls don’t automatically learn how to wash dishes, sew clothes, make food and go on adventures. The boys don’t immediately launch into a crusade of adventures gone wrong where they have to rescue their friends and comfort the girls. Most post-apocalyptic books would have you believe that the kids who survive are either

a.) mean, tough kids who will not hesitate to shoot you, maim you, steal things, etc. etc.
b.) someone who the mean, tough kids care about
c.) abnormally and weirdly lucky enough not to be shot or maimed and even more lucky to find safety, shelter and food

Maybe they’re right. Survival is a tricky thing which does not really tie in with morality anywhere. But I’d like to believe that the progress we’ve made from an ape like thingy to a human over several million years can’t be erased in a day. Even if that day includes the eruption of a super volcano.

This book features a teenage guy ( words can’t describe how refreshing it is to have a strong, male main character for once) who is a real teenager. Sure, he’s selfish enough to want to stay at home and play computer games while his parents visit his boring relatives but he’s kind of selfless too. He cares for his family enough to go and make sure they’re all right even though several feet of ash cover the ground. He has a heart and he demonstrates his respect for human life over and over again as he meets several people through the course of the book. Sometimes this trait gets him into trouble while at other times it’s his saving grace.

Darla is one of my favourite female characters ever.  She is the ultimate woman (yes, woman- not girl). She’s intelligent, proactive and strong. More importantly, she’s resourceful, clear minded, determined and capable. Without her, the MC would have died several long, miserable deaths and she doesn’t mind reminding him of the fact several times. If Annabeth from Rick Riordon’s Percy Jackson and the Olympians ever grew up, I imagine she’d both look and act like Darla. In fact, I’d say Darla would be Mary-Sueish if not for the fact that she’s seriously lacking in empathy. Oh well, I guess you can’t have everything.

Under the bubbling hot springs and geysers of Yellowstone National Park is a supervolcano. Most people don’t know it’s there. The caldera is so large that it can only be seen from a plane or satellite. It just could be overdue for an eruption, which would change the landscape and climate of our planet.

For Alex, being left alone for the weekend means having the freedom to play computer games and hang out with his friends without hassle from his mother. Then the Yellowstone supervolcano erupts, plunging his hometown into a nightmare of darkness, ash, and violence. Alex begins a harrowing trek to seach for his family and finds help in Darla, a travel partner he meets along the way. Together they must find the strength and skills to survive and outlast an epic disaster.

Now that I think about it, a supervolcano is actually a pretty novel idea for a book plot (pun intended). Mike Mullin delivered the plot amazingly well with strong characters and emotion evoking incidents.

The romance in this book was initiated by Darla and that’s a remarkable feat. In young adult books, why is it always the male who has to take initiative? Personally, I think Alex and Darla have a lot of chemistry. The romance is one of the best things about this book.

A fifteen-year-old boy left alone for the weekend. An attempt made by him to get to his family in the wake of the mother of all natural disasters. An eruption. Bandits.  Cannibals. Prison Escapees. Fighting. Snow. Choking ash.  More ash. Murder.  Rape.  More ash. Love.  Refugee camps. Escape. Marauders. More ash. This book has action of all kinds- physical, mental and emotional.  Mike Mullin must be a crazy kind of guy to imagine all of these things in the minutest detail. But I don’t mean he’s thrown in a bunch of stuff for shock value or to evoke a sense of disgust like Julianna Baggot did in Pure. It’s all plausible and beautiful in a twisted sort of way.

No plotholes as of yet. Or none that I could identify, anyways. I think I was a little too caught up in the story to notice any major discrepancies. Way to go Ashfall!

Why are you still reading my review? This book was amazing times infinity. If you haven’t read this book yet, you don’t know what you’re missing out on. This book reminds me of why I love young adult dystopian post apocalyptic books so much. If you need a reminder or if you’re not truly into the genre yet, buy (or settle for reading) this book right away.