Name of Fanfiction: Harry Potter and the Methods of Rationality
Penname: Less Wrong

The writer, Eliezer Yudkowsky is an AI researcher and decision theorist. Maybe that’s why he puts forward this question: What if Harry Potter was actually smart? He then proceeds to write a masterful epic based on the question.  I don’t mean to offend any Potterheads here; I’m one myself actually. But even I can admit that Harry Potter does a lot of things which can be considered downright irrational and stupid in the course of the seven books. Eliezer writes under the penname ‘Less Wrong’. I believe he chose the pseudonym because he’s doing his best to create a version of Harry Potter that is less wrong, a version that has less inconsistencies, logical fallacies and plotholes.

What’s Different In the Fanfiction:

I can’t say much more without totally giving away the plot. But please be reassured, the fan-fiction’s an intricate and twisting epic filled with sub-plots which all wrap up neatly at the end. Trust me, it’s a work of art. It was finally completed on March 14th. So if you decide to read it now , you won’t be forced to agonize over the long intervals of time between updates.

You should read this, even if you weren’t a fan of the original Harry Potter Series.
Although, be prepared to open a Wikipedia tab every chapter; Eliezer Yudkowsky knows his science and is unhesitant in using it in his writing. This isn’t a light read; You need to focus to make sure that you’ve gotten the intricacies  of what’s going on.

You can read the fanfiction (obviously free) here:

Some Pearls of Wisdom from the Book:

“I only want power so I can get books.”

“World domination is such an ugly phrase. I prefer to call it world optimisation.”

“I’m lazy! I hate work! Hate hard work in all its forms! Clever shortcuts, that’s all I’m about!”

“To worship a sacred mystery was just to worship your own ignorance.”

“What people really believe doesn’t feel like a BELIEF, it feels like the way the world IS.”

Most kids would do anything to pass the Iron Trial.

Not Callum Hunt. He wants to fail.

All his life, Call has been warned by his father to stay away from magic. If he succeeds at the Iron Trial and is admitted into the Magisterium, he is sure it can only mean bad things for him.

So he tries his best to do his worst – and fails at failing.

Now the Magisterium awaits him. It’s a place that’s both sensational and sinister, with dark ties to his past and a twisty path to his future.

The Iron Trial is just the beginning, for the biggest test is still to come . . .

Cassandra Clare and Holly Black are The YA paranormal authors (notice how I’ve capitalized the T in the); You’ve definitely heard of the Mortal Instruments and the Infernal Devices series. And The Coldest Girl in Coldtown and the Curseworkers series are literary masterpieces. So what are you supposed to get when two crazy, awesome geniuses (No, it’s not genii) get together to write a book? A crazy, awesome book maybe? Unfortunately that’s not what we got with the Iron Trials which is the first book in the Magestrium series.

Two boys and one girl go to a ‘Magic’ school which is dangerous. Hmm…what does it remind you of? It wouldn’t be Harry Potter by any chance, would it?

So how is this book like Harry Potter? Oh! Let me count the ways.

First of all, out protagonist is a kid named Callum Stone (but everyone calls him Call *snicker*) who was brought up by a man who called magic ‘dangerous’ and was considered a freak by the neighborhood. Deja vu, anyone ?Now let’s move on. I have to give Clare and Black points  for the test. After all, I never did get how it was possible for Hogwarts to figure out who was eligible for their school and who wasn’t (Oh, right there’s something called magic).

Anyways…Right away we see this beautiful, brilliant girl who is so obviously better at magic than everyone else…She’s Hermione with better hair. There’s also another kid whose pretty talented…so guess who forms the (un)holy trinity that’s the new golden trio? That’s right. The best ‘Master’ in the school takes these three under his wing and tells them that together they form a special combination. Can I just say knock-off?

Wait! It gets worse. The most obvious thing is the group of antagonists. Do you know what they call themselves? Mmmhmm, it’s the Enemy of Death. Is it just me or does that sound remarkably similar to the name ‘Death Eaters’? As if that wasn’t enough, their leader is a guy who is desperate for immortality (now why does that sound familiar?).

That’s the big stuff. There are other smaller things in the book which give you a strong sense of deja vu. For example the set-up of the castle as well as the appearance of ‘food’ (remember that scene at the Yule Tide Ball in the fourth book where Dumbledore gives everyone at the table whatever food they wish for?) as well as the common room (although it’s given a lamer name- I think it’s called the games room).

Another thing that annoyed me about this book was the fact that it wasn’t Young Adult fiction. For some reason, I thought this would be young adult. It wasn’t. Not even close. It’s more middle-grade than anything else. Maybe this book will be like the Harry Potter series (in yet another way) in the fact that it will slowly progress into a more mature and complex series with time. (It’ll probably take a long time, though.)

Towards the ending, the book gains a little more originality and complexity. Stolen identities and intrigue. However, after all the obvious hints in the book , I had to say I knew where the book was going. And even though I’m not disappointed with the ending, I’m far from being awed. The cliffhanger was enough to redeem the book…almost. The keyword here being almost

The Iron Trials is a cheap rip-off of Harry Potter. Unless you’re feeling a bunch of Harry Potter nostalgia, I wouldn’t recommend this book to you. In fact, I don’t think I would recommend it even then; seriously guys,there’s a lot of good HP fanfiction out there. Needless to say, I am disappointed. I am very disappointed.

Um…yeah. You read that right. This post is going to be about book dedications or acknowledgements. Whatever you want to call them.

Usually I don’t pay much attention to the book dedications. I mean, if I’m opening a book I’m interested in the story and the characters. Not who the author loves and how they helped them come up with book, etc. But there are some dedications which caught my eye. Here’s a list.

1.) Abundance of Katherines by John Green.

I may not like the guy’s books but even I have to say An Abundance of Katherines is pretty cute. The main character is a guy who really loves anagrams (and constantly uses them), so that makes this dedication prettycool in context.

2.) The House of Hades by Rick Riordan

After the Mark of Athena ended with a cliffhanger with our favorite couple going to Hell-literally, fans all over the world cried, screamed and freaked out in general. Rick Riordan replied in his next book via dedication: 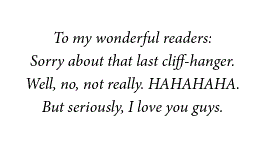 Yes! It’s in the shape of Harry’s scar and we finally find out why it’s so important and terrible in this book

4.) The Adventures of Huckleberry Finn by Mark Twain

One of the first books I ever read- but I have to say dedications don’t get much better than this:

This isn’t from a single book but from a series which I haven’t actually read but I’m including this because I can kind of relate to this; my Dad definitely doesn’t read fiction- if, no when, I publish a book, he probably wouldn’t read it. Plus the dedication’s completely hilarious.

“This Book is dedicated to my father Joseph Hill Evans with love.
Actually Dad doesn’t read fiction, so if someone doesn’t tell him about this, he’ll never know.”

“This Book is dedicated to my father Joseph Hill Evans with love.
As I said before, Dad doesn’t read fiction. He still hasn’t noticed that this thing is dedicated to him. This is Volume Two – let’s see how many more until he catches on.”

“This is still dedicated to you-know-who, even if he doesn’t.
Maybe we can keep this a secret all the way to the final volume.”

“My father still hasn’t actually cracked any of the books – so, no, he still hasn’t noticed. I think I’m just going to have to tell him. Maybe I should break it to him gently.

“Everyone here who hasn’t had a book dedicated to them, take three steps forward. Whoops, Dad, hang on there for a second…”

6.) The End (Series of Unfortunate Events #13) by Lemony Snicket

So because technically I cheated by adding a series that I’ve never read, I’m addign this one too.

This series will always have a special place in my heart. It taught me how to use the term ‘quid pro quo’ properly, the meaning of ambidexterious and how to recite Swineburn- all at the age of eight making people (ncorrectly) think I was a bit of a child prodigy. The last book in the series began beautifully  like this:

For Beatrice –
I cherished, you perished.
The world’s been nightmarished.

So these are my favorite dedications. What are yours?