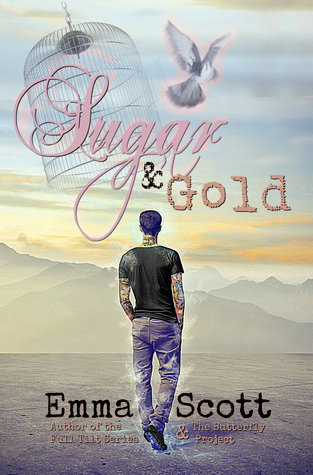 Nikolai Alexei Young was born with a special gift…one he’d do anything to lose. The heart and soul of every person he comes into contact with is an open book to his heightened senses. Colorful emotions, whispers of thoughts, the sour tastes of old memories…He feels them all. The sci-fi books would call him an empath. For Nikolai, his ability has made him an exile. He roams the U.S. alone, avoiding the glut of life in big cities, and using his innate talents to win money in underground poker games. Just enough to keep going, one town to the next. He has no hope that his life can be anything else, until he meets her…

At nineteen, Fiona Starling was trapped in an ugly, desperate situation until she freed herself the only way she knew how. Now three years later, living outside Savannah, Georgia, she is rebuilding her life on her own terms; seizing every moment and saving every penny so that she might fulfill her dream of moving to the raw wilderness of Costa Rica. But behind her carefree smile beats the heart of a lonely young woman haunted by her past, until a chance encounter with a tattooed stranger changes everything…

Fiona takes Nikolai under her roof for three sultry nights, waiting out the rain of a summer storm. She grows more and more fascinated by this brooding stranger with whom she shares an intense physical connection—a connection so strong, she wonders if there is something between them beyond lust and passion. Nikolai is shocked to discover that Fiona calms the raging turmoil in his heart. She alone silences the din of other people’s lives, and envelops him in the sweet beauty of her inner self. Every moment he’s with her—every touch of her skin—brings him closer to the peace that’s been eluding him his entire life.

But Fiona harbors secrets that she is too terrified to reveal. After Nikolai confesses his unique ability, she is caught between wanting to believe him and fearing he’ll eventually unearth her own dark past. When the unthinkable happens, Fiona’s plans come crashing down, and Nikolai discovers his hated ability might be the only thing that can save the woman he loves.

If I’m being honest, the cover and title are what attracted me to this book. Shallow butterfly that I am, I thought they were absolutely gorgeous. I didn’t think twice before requesting this book from Net Galley.

I’ve read other books by Emma Scott. I really enjoyed the Full Tilt duology and The Butterfly Project. I think both are fantastic new adult books that show how a relationship can transition from platonic to romantic, and that dealing with other serious issues doesn’t mean that a relationship isn’t viable.

However, in Sugar & Gold, the relationship was too fast and too dramatic for me. Though the characters themselves seem to acknowledge the relationship is “backwards”, they do not make a real effort to slow it down and get to know each other. Another thing that might offend you: I was a bit uncomfortable with Fiona’s obsession with Nik’s “Russian-ness”; to me, it seemed like a fetish to me instead of a distinct appreciation for a portion of his character.

I think the concept is beautiful. It is not the first time I’ve seen an extremely empathetic person who can see auras in a novel, but I adored how Nik put his abilities to use in poker. His poker skills also allowed for great banter between the characters and gave them some chemistry. I also think that his empathy made him the perfect person to reassure Fiona, who suffered from emotional abuse, that she was beautiful and worthy.

The reason that this book failed for me was because I did not think there was enough build-up in the relationship between the characters. Additionally, I was not a fan of the pacing. The beginning dragged on with multiple sexy scenes, but not enough substance. The characters were too wrapped up in themselves and their own secrets. For most of the book, I felt like they were courting an ideal instead of an actual person. This made the first 50% seem repetitive.

The ending felt inconclusive and anti-climatic to me. There was very little retribution and it just wrapped up too neatly and quickly for the bloodthirsty part of me which likes the characters to be uncertain and precariously balanced at the end of a novel.

This book will still appeal to readers who want to read a love story about a genuinely kind people who have suffered meeting a person who will always put them first. However, if they think about it too long, they will realize that it’s sugar, empty calories and gilt. There’s no real nutrition or metal in Sugar & Gold.

Oh and BTW, this might be because I read How To Save A Life  (Dreamcatcher #1) a long time ago, but I really didn’t feel as the two books needed to be connected. Frankly, it felt unnecessary.