right, Alright.
I might be a tad bit obsessed with Panic! At the Disco’s Death of a Bachelor Album. Only a little, mind you because it’s not like I’ve listened to it for hours on repeat. It’s not like I sometimes catch myself humming it while on the road or at school during class. It’s not like I haven’t been quoting it everywhere waiting for someone to get one of the references. Nope. Not at all.
It’s a hell of a feeling, though.

But this album is so very Panic! Who else could have written the line “Every night in my dreams, you walk on a tightrope of weird.” [Crazy=Genius]
But at the same time, you can see that Brendon Urie’s done some growing up. In his eventful life, he’s regretted some of the stuff he’s done. Urie’s told fans over and over again that he regretted the I write sins, not tragedies video but it’s the first time he’s immortalised his feelings in song:  “You shoulda seen what I wore/ I had a cane and a party hat.” [Don’t Threaten Me With a Good Time]

As always, Panic! at the Disco’s lyrics are so weird, I’m completely befuddled. Is he trying to call up the imagery of drunken revelrey in Las Vegas with “I lost a bet to a guy in a Chiffon skirt/ But I make these high heels work”  or is there some deeper meaning. We will probably never know.

But I’ve spent a lot of time thinking about the title track. Yep, Death of a Bachelor. It’s significantly slower than the other songs and I think so far, it’s the only music video in this album in black and white.

While there are a lot of songs in this album which directly refer to the craziness of his wild days, like La Devotee, Victorious and The Good, the Bad and the Dirty and another several which refer to making new memories like House of Memories and Golden Days,  I think Death of a Bachelor is the one that is most obviously reconciling the two.

He refers to a change that’s already happened with the lines “People have told me I don’t look the same” while the song in itself refers to the change marriage brings to a bachelor’s lifestyle.

This song is interesting because it has all sorts of implications tangled up in it.  A major part of the chorus: “A lifetime of laughter at the expense of the death of a bachelor.” very clearly states that sacrifices have to be made. Taken literally, somebody else needs to die  for a person to be happy.  That has all sorts of ethical connotations to it. For example, is it okay for one person (the bachelor) to die so that two people (the married couple) can live happily. Society would have us believe so.

Even if we take it as a metaphor for two aspects of a person like we’re probably supposed to as evidenced by “I’m cutting my mind off/ It feels like my heart is going to burst”, Brendan’s still literally talking about suppressing a part of his personality. That’s horrible and honestly it makes me very afraid of marriage. 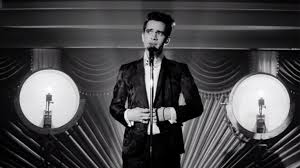 This song is very much a groom’s pre-wedding jitters. What else could it be with all the references to thinking as you drink, veils strangling people to death and being pushed off a cliff. But at the same time it’s a very deep, metaphor for society’s rigid expectation that you actively change your personality every time you enter a new phase of your life.

As someone who has a bunch of friends who will be heading off to college in a few months, this is an unnerving thought. If you’re heading off to college soon or making some other massive life change, I just want to remind you that you are not compelled to change. It’s true that nothing in life is constant but change, but don’t feel pressured to change yourself. You do not need to be more mature, more grown-up, more patient, more understanding right away.
There’s a learning curve to change and no one expects you to be a perfect adult who’s in total control of your life the day you turn 18.  If it happens, let it happen. If it doesn’t happen, don’t force it.